.
That’s what I keep telling myself as I gobble up more and more space in the world’s
most super market, the Hudson Supermarket.
.

.
And even though I have just added on again, I still look past my now-very-long run
of booths and see how much more stuff I could put in here if I only had just another
30 or 100 feet.
.

.
I could have more factory cart furniture. I’ve been making upholstered seating from
carts for more than 10 years and I never get tired of them. I don’t have one myself
because I  have to replace these faster than I can have the upholstery completed. But,
someday….
.

I could have more chickens!

.
More French chaises. This one is upholstered in a vintage heavy linen, embroidered
French sheet, natch.
.

.
There would be room for more deconstructed American chaises. This one
started out as a fainting couch…covered in that  fancy-schmancy shiny stuff,
stuffed with uncomfortable horsehair. It had one of those upholstered curved
things (to keep fair maidens from toppling as they fainted dead away, I
suppose) along what is now just an open side. The thick, hand woven linen
and piles of down invite cat naps and other activities that don’t necessarily
require passing out.
.

.
I designed the pair of fireside benches (the frames are built from the ground
up) and had them upholstered in the most beautiful ca 1900 Swedish drop
cloth material, complete with all the markings and fantastic hand worked
repairs and patches.
.

.
They’ve already been copied by a well-known retailer. Whom I shall not
name.
.

.
Their mass-produced fabric is unusual and really wonderful.
.

.
The 1930s steamer chair is upholstered in the last of the drop cloth material.
The grommets, old rope and other parts of the drop cloths are left intact and
look  incredible….so there, big international retailer!
.

.
I really like small stuff, but only if it is old and different from the run of the
mill things that are everywhere. These jars, new-old stock with wonderful
labels, are sure to be reproduced and will show up in a retail store near you
very soon!
.

.
These fabric sample books, ranging from 1887 to 1912, are loaded with
pieces of wool and the most wonderful old hand-written notations and
labels. They are real treasures and are hard for me, a lover of textiles, to
let go. The wavy pages of the book in the middle of the table is like art to
me and, thus, even though it is the newest, is my favorite.
.

.
Other textiles, samples of linen and cotton duck.
.
.

.
of all different kinds.
.

.
I have dozens of old Swiss Army bread bags, perfect for slinging
over a shoulder. The leather loops were meant to hang on the handles
of a bicycle.
.

.
Canvas of all kinds gives me a thrill! The thermos cover is full of buckles
and ties and do-dads, including the owner’s initials.
.

.
In a departure from my mostly masculine look, I couldn’t resist a load of pretty
1920s-40s lingerie and jewelry bags from a stone house in Vermont.
.

.
Old advertising, there’s nothing like it anymore. Here, a heavy paper
electric light! I wonder if anyone really believed that the Easy Washer
and the Easy Ironer were  easy?
.

.
A 1950s paint bucket! I love the embossed numbers and the
happy housewife.
.

.
Even old oil cans looked better back then.
.

.
The window at my post office is nowhere near as good looking as this one
with its gilded lettering, patterned glass and lack of junk mail.

.
I have a hundred cultivator parts that make perfect little shelves now that
their farmer has gone modern. The 1937 orange paper “license plates” in
the chrome holders are fillers, merely meant to show how they would look
on a brand new Chevy.
.

.
A see-saw turned bench. Something fun for a front porch.
.

.
And a mid century papier mache panda.  Animals. Still the loves of my life.
.

But, best of all, paintings by my friend and the greatest living artist,

of country life is the way we would all like it to be.  As much as I would

like to keep it for myself, I have it on 1st Dibs for all the world to see.

.
I think this one is my favorite with its farm animals, barn, baskets and view.
.

.
But what about this one? The color! The sheep! Is that a Swedish drop cloth
I see on the chair? Picking a favorite is hard for all of us. We really just want
it all. In the end, I guess it comes down to space. We always need just that
extra 30 or 100 extra feet.
.
All photos and written materials are the legal property of Stephanie Lloyd
and Stephanie Lloyd At The Hudson Supermarket.  Please do not copy,
reproduce or in any way use without express written permission.

What a difference a day makes

Oh, and a mantle and some antique furniture and some funky accessories. 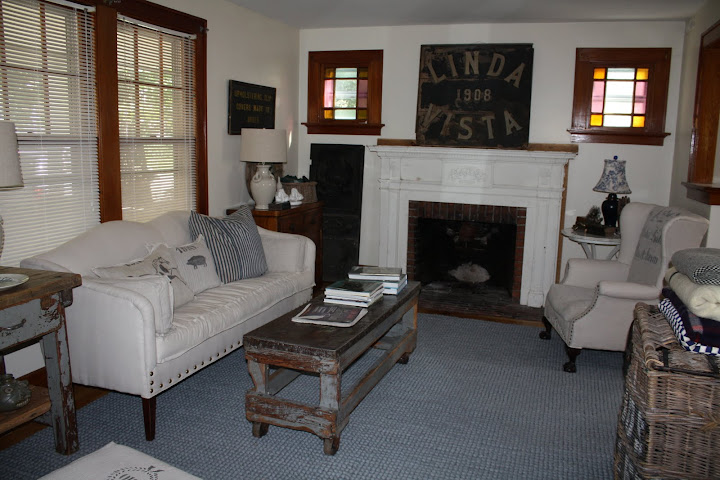 in Burlington, Vt. to go from ok to Oh Wow!

The 1920s mantle made all the difference. It took Ken a few hours to chip away

the existing brick surround and cut off parts of the mantle for a perfect  fit, then 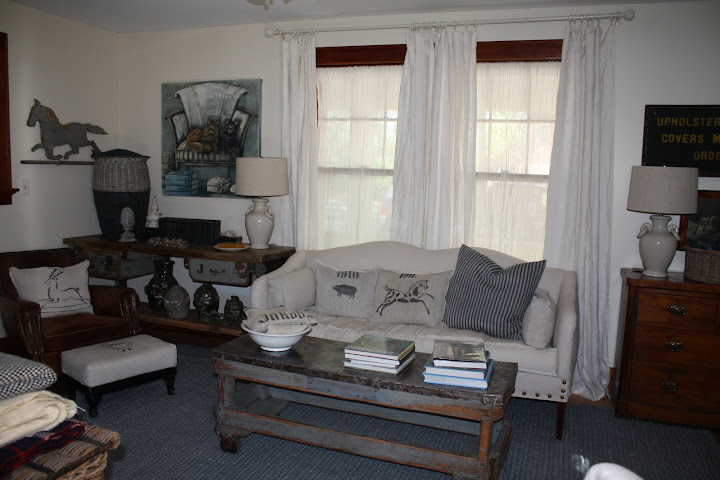 I couldn’t operate without an armload of German grain sacks,  piles of floppy

And, where would I be without a few buckets of blue-grey paint?

I notice that, once again,  animals factor heavily in my decorating decisions.

And books! No one should be without them!

and line up waiting to be read or just to be admired.  Books add warmth to a 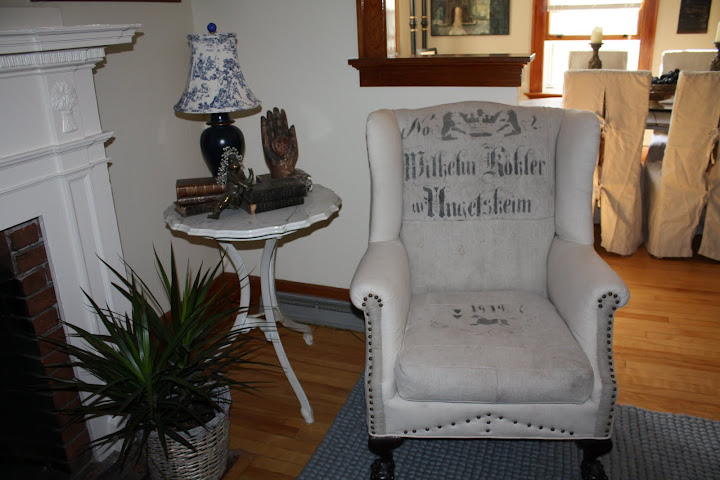 joy that those 24 little hours will provide.

Driving through Vermont, we passed what looked like just a wetland, pretty with the

Green Mountains majestic behind it.  However,  many of the marsh’s  trees were topped

Of course, we had to go back to check  this situation out.  In spite of being on a highway

with not much of a shoulder for leisurely parking and photo-taking.

Nests full of herons.  And babies!  The parents took turns guarding, flying off to eat and

returning with a meal for a baby.

The tiny black question mark-shaped thing in the nest is a baby’s neck and head. Even with

my stabilized telephoto lens, the distance and the shake of the truck make these birds hard

to see. I wish the photos were better. But, the thrill of this siting made me want to have them

here anyway. I’ll try to do better next time.

–It was just a ride without an agenda. Well, I did want to get some Almond Joy

ice cream at the end of the trip. But other than that, just a ride. We wanted to

meander, turn down intriguing country roads, see how the leaves were

progressing, poke around some pretty towns and see the sights (farms, cows,

geese) alongside the road.

–We made a big loop east from our house in NYS, north through Vermont, west in

Orwell, VT. to cross Lake Champlain at its narrowest point, riding the 12-vehicle

ferry into Ticonderoga, NY, then south along Lake George, east out of Saratoga and

–And we weren’t the only ones making this state-to-state loop. On the ferry, we met a

couple who had picked 20 bushels (!) of potatoes in NYS and a few bushels of apples

in Vermont. After exiting the ferry, they planned to stop for raspberries just below

–Best of all, though, was the pumpkin man!

His farm is in Vermont, his customers are in NY, his loop is made daily.

in the yard proudly sported price tags and inside, well-organized chaos was the name

Who knows how, in this place of such abundance, hanging on the back of a door, I found

a US Domestic mailbag ,  perfect to upholster something with.

At a tag sale, I found 40 old horse show ribbons, an interesting base for a drafting table

to turn into a dining table and a nice oldish (the 60’s) weathervane with a copper squirrel.

We saw the beginning of the leaves, plenty of barnyard inhabitants, just about everything

anyone would want to see on a beautiful fall day. I got my ice cream!

–But, for some reason, maybe because I was so charmed by sharing the small ferry with a

big old cart full of pumpkins, I just can’t get that pumpkin man out of my mind.